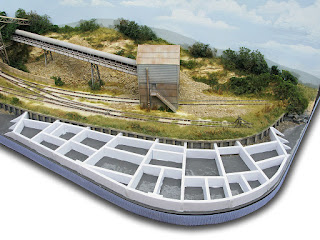 We all those projects that have been forgotten, or simply stalled. I'm no exception, because there's always something new to work on or maybe one is just bored or don't have the time because that nasty real world has jumped in the way - which it needs to do from time to time.
Last summer you may just recall plans to reclaim some land on Cement Quay's extension called Old Quarry Wharf? I certainly had, until I was moving layouts about the other day and spotted the beginnings to the right which basically is about performing some land-reclaim, adding some nice piles of aggregate, maybe even another siding and loading facility and so on.......

The little cameo above with the Austerity tank 'Radstock' helps create the look I'm after with the weeds and spoil ridden track, and hopefully publicly airing these thoughts will kick-start the project back into action, because people at shows will only tut if I haven't!
Posted by Chris Nevard Model Railways at 12:17 pm