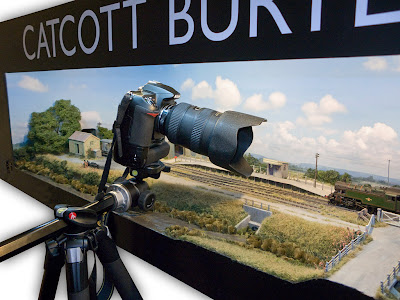 Ah - gotya! I expect you were hoping for some prime totty! Sorry, nothing so exciting, but what would you expect on a toy train BLOG? But I can tell you that my huge heavyweight vintage pro spec Manfrotto Art 075 tripod is suffering with 4 broken leg extending clips after 25 years of use - not bad, it having been made in a country better known for cars that rust when new and dishwashing machines. Getting hold of spares has been impossible, so for the last few shoots I've been resorting of using a pair of pliers for any leg length adjustments - which is rather tardy to say the least.

So, whilst I await some other kind  of mechanical fix for 'the beast' probably involving a keen chap with a  foundry and skills normally used maintaining the Eiffel Tower, I've  taken delivery of a Manfrotto 055XPROB. Why this model? Well, it  has an arm which allows me to suspend a camera actually above a layout  which is something I've never been able to do until now. Benbo is a well  known make that's been doing this 'arm thing' for years, but with Manfrotto now taking this useful route, it allows me to use my various tripod heads (a ball and  socket being seen in the shot).

So, here we have a snap  of a camera taking a shot of another camera taking a photo of Catcott  Burtle, the view as you would briefly see shortly before hitting the ground at 120 MPH - if  having fallen from an Tiger Moth! 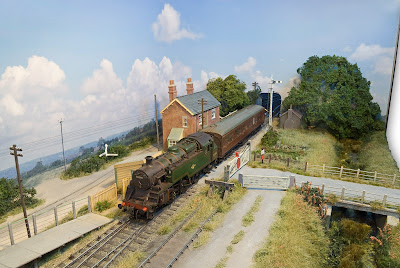